« These kinds of methods have been used in a variety of research, especially in the last 20 years. Here are just some of the general findings:

■ When doctors were shown patient histories and asked to make judgments about heart disease, they were much less likely to recommend cardiac catheterization (a helpful procedure) to black patients — even when their medical files were statistically identical to those of white patients.

■ When whites and blacks were sent to bargain for a used car, blacks were offered initial prices roughly $700 higher, and they received far smaller concessions.

■ Several studies found that sending emails with stereotypically black names in response to apartment-rental ads on Craigslist elicited fewer responses than sending ones with white names. A regularly repeated studyby the federal Department of Housing and Urban Development sent African-Americans and whites to look at apartments and found that African-Americans were shown fewer apartments to rent and houses for sale.

■ White state legislators were found to be less likely to respond to constituents with African-American names. This was true of legislators in both political parties.

■ Emails sent to faculty members at universities, asking to talk about research opportunities, were more likely to get a reply if a stereotypically white name was used.

The criminal justice system — the focus of current debates — is harder to examine this way. One study, though, found a clever method. The pools of people from which jurors are chosen are effectively random. Analyzing this natural experiment revealed that an all-white jury was 16 percentage points more likely to convict a black defendant than a white one, but when a jury had one black member, it convicted both at the same rate. »

How can Europe better integrate immigrants?

—When immigrants come to France they should adopt French culture.

—Well, this is a very French debate, and I would really encourage Paulo to think more widely on this one. There is still a residual idea in France that the way to deal with diversity is simply not to recognise its existence, and just to say everyone is a ‘citoyen’ the same as any other, and everyone must subscribe to the values of the république, period.

A better way to approach the question of diversity than assimilation has been the notion of interculturalism, which the Council of Europe has developed over the last decade or so. I’ve been one of the people working with the Council of Europe on this paradigm, and the emphasis is on managing diversity in a way that recognises it as a two-way street.

A better way to describe it than Paulo is the way Jürgen Habermas does; that is to say that it is perfectly reasonable for members of minority communities to make special claims, but they must do so in universal language that anybody else can understand and argue with or debate. In that context, I think it is possible to deal with France’s problems of diversity within society, and obviously you’ll be aware of those problems expressed in the banlieues and the riots ten years ago. So, I think that there is a need to go beyond the narrow French debate and to draw language from elsewhere in Europe to find better solutions.

We should work to become more aware of our inner thoughts and feelings and how they affect our beliefs and actions.

When we have a stereotypical thought about a racial group, we should follow it up with an alternative thought based on factual information that discounts the stereotype.

We can obtain this factual information by leaving our comfort zones and exposing ourselves to people of different races.

We should be willing to engage in honest dialogue with others about race that at times might be difficult, risky, and uncomfortable.

We should also seek out media portrayals of different races that are realistic and positive.

As we gain more awareness and knowledge about racial groups, not only will our racial stereotypes lessen, but we will also become better equipped to educate and challenge others about their racial stereotypes. As we change ourselves, we can elicit changes in others through our examples and the quality of our conversations. In doing this, we work to create a society in which all races are valued, appreciated, and embraced. »

But Cook says the researchers also found with extensive training, officers were able to eliminate the bias. It can be reversed once it’s recognized. »

« Thus, the positive correlation between perceptual training and reduction in implicit social bias is not due to simple exposure to African American faces, nor a result of repeating either the ORE or ALPS tasks. Put succinctly, as Caucasian observers become better able to individuate African American faces, their implicit racial biases are reduced. »

« It is worth noting that we are not claiming these training effects can account for the multitude of factors contributing to implicit racial biases; instead, we are focusing on the possible contributions one factor – perceptual biases. »

« One study found subjects were about 30 percent more likely to shoot an unarmed black person than an unarmed white person.

“When we’ve used eye tracking in that task, what we find is that the eyes always go to the person’s face first and then tracks down to see what’s in their hand,” explained Amodio.

Basically, they see the person’s color first, then may make a biased decision. “It’s

automatic,” Amodio said. “It happens within 1 or 200 milliseconds.”

He told CBS News that he has tested the strategy of training subjects to not  automatically look at a person’s face. “We found that it’s effective in reducing bias in shooting.”

In the lab, focusing on the object rather than the race reduces the mistaken shooting of unarmed blacks by as much as 45 percent. »

Audrey Hamilton: How do people work on getting rid of these biases if they don’t know they’re biased?

John Dovidio: That’s the biggest challenge because most of us are really well practiced at convincing ourselves that we’re not prejudiced. So, most of us want to be good people. Prejudice is bad and when we think about it, we always do the right thing.

One of the consequences of aversive racism or unconscious bias is that you don’t discriminate in a situation where what’s right and wrong are clearly defined because you know what you’re supposed to do when you do it. But it usually happens when you can justify a response on the basis of some factor other than race. So, there may be like two people that you are interviewing – one white and one black – and you shift your criteria for the job in a way that actually favors the white person without actually directly discriminating against it.

So the problem is every time we look at our behavior and monitor our behavior, we behave in an egalitarian way. And it’s only when we’re not paying attention that we discriminate. So to your question, what we have to do is probably – if something’s unconscious, you don’t know you have it. It’s that simple. So you can’t think about what you’re really feeling. What you have to do is assume you probably have these biases if you’re an average American.

And then what you have to do is try to control those biases in the way you behave towards people. You often have to acknowledge you may have these biases. So, it’s an ongoing battle because you can’t really get rid of these. They’re like having habits of mind that you’ve grown up with. And so you just have to work at being always alert, always conscious and always receptive to the possibility that we might be biased.

Audrey Hamilton: I hear a lot about when you’re eliminating these biases, a lot of it is just about having conversations about race in general. Maybe with people who are not your racial or ethnic background. Do you think that helps sort of uncover these biases that you don’t know you have?

John Dovidio: Yeah, one of the problems with aversive racism that I mentioned before is that you actually avoid the group and you avoid the group because they make you uncomfortable and you can, therefore, maintain the stereotypes of the group. If you have a lot of interaction with members of the group, then you no longer think about people as being a member of that group, primarily. You think about them as individuals. And so, you haven’t really gotten rid of the implicit bias, but you’ve been able to fine tune the way you interact with many people. You just dial up a broader array of repertoire of being able to interact with people and understand them.

Audrey Hamilton: How do they go about eliminating those biases – or is that even possible?

John Dovidio: I’m not a big fan of trying to eliminate biases. Biases that are 50 years in the making you don’t unmake in a very short period of time. But one example – I do some work with police forces indirectly through an organization I’m part of. But, one of the things that they said was police officers today aren’t like the image we had of police officers in the past walking the beat. Police officers today are in a car that has so much electronics, that they don’t have to get out of their cars. Someone even told me – I don’t even know whether this is actually true, but I bet it is – that there’s more electronics, high-powered electronics in the average police car today than there was in our first space [ships]. So what that means is the police officers are in the car and don’t interact with the community and the community sees the police officers as distant and powerful over them. And you can’t be an effective police officer unless you have the trust and cooperation of the community. So what they’ve tried to do now, and we’ve recommended this in several places, was to get the police officer out of the car, just as you said before, to meet people as individuals. To be able to distinguish one from another and therefore not overreact.

Comment combattres les préjugés? Montrer les preuves de la contraire, aller vers les gens qui sont differents.
"Biases are the stories we make up about people before we know who they actually are."

« The larger issue is this: Americans have to honestly come to grips with the racial tension, white attitudes toward black and brown people. If that doesn’t happen, the nation is doomed to see a repeat of these cycles of unarmed people of color being killed and outraged citizens taking to the street because there seems to be no other way to make the powerful listen. 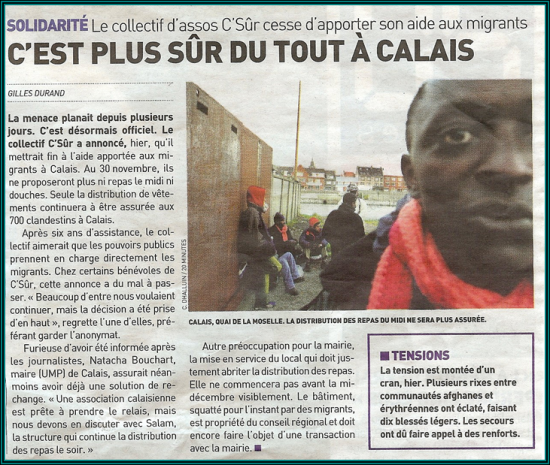